This is a tale of two towns. One is the great walled garrison of Edward I with its iconic castle, ruthlessly built on top of an ancient Welsh fortress. The other is the exuberant market town that cascaded down the hill in an astonishing variety of architectural styles over the next nine centuries. 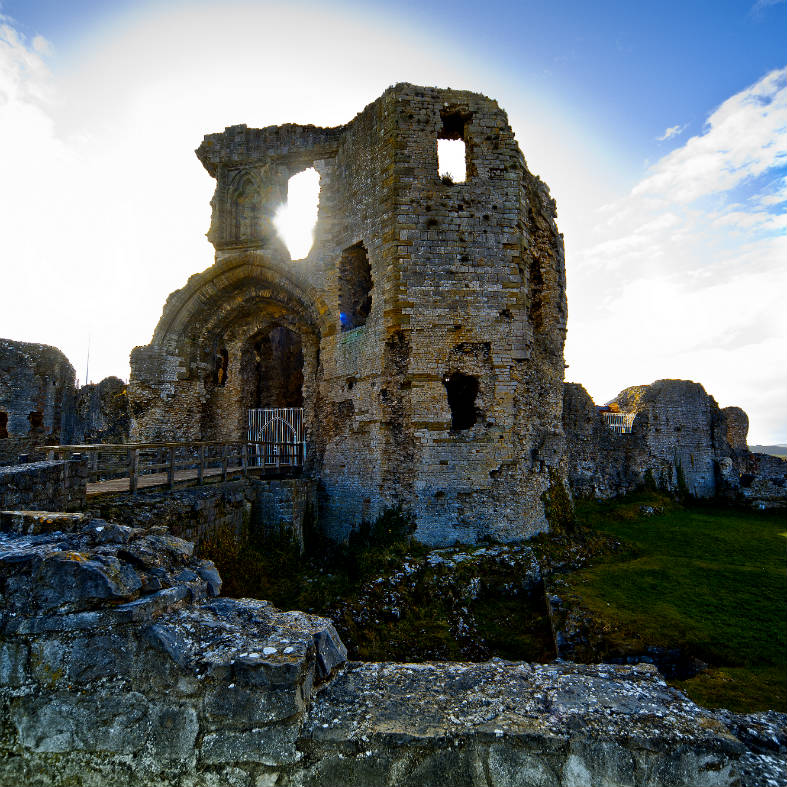 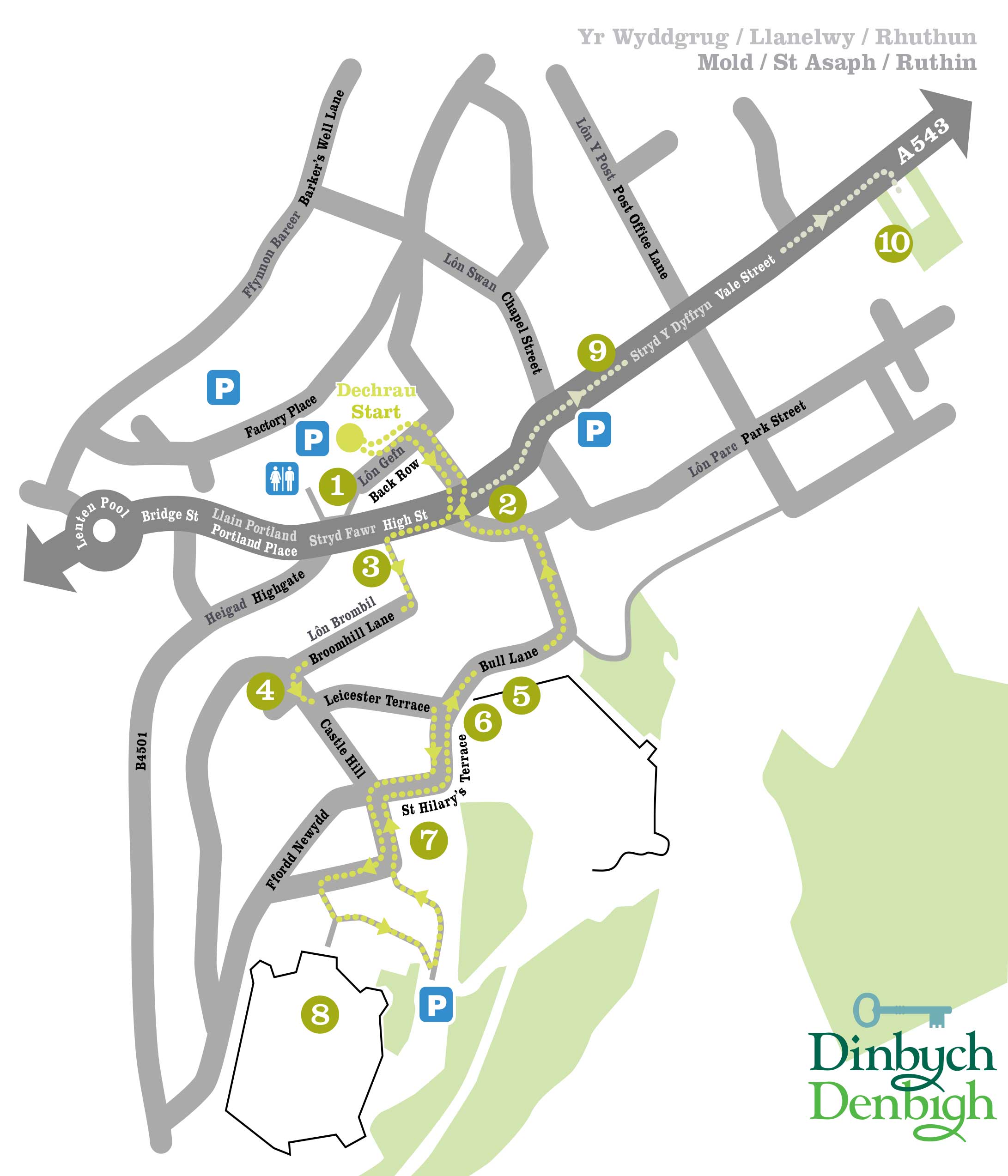 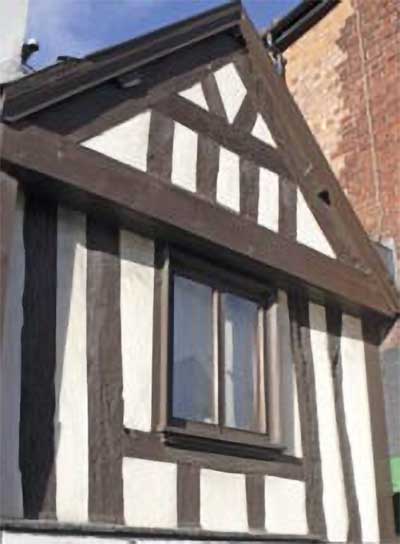 Stand in the car park with imposing St Mary’s Church at your back and head for the passageway beside the Eagles Inn.

Back Row was once part of the medieval marketplace and contains the oldest buildings in Denbigh not connected with the castle or town walls. The Golden Lion pub was probably built in the early 16th century as two separate shops. You’ll also notice the back of 33 High Street, better known as Siop Clwyd. Thanks to dendrochronology, or tree-ring dating, we know this crooked little timber-framed building dates from 1533, making it one of the oldest shops in Wales. 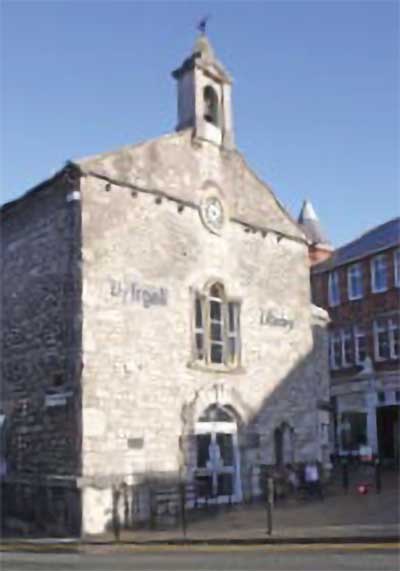 Turn right into Crown Square and walk past the war memorial by Charles Leonard Hartwell towards the library.

The statue outside the library and art gallery is of controversial Victorian explorer H M Stanley, born in Denbigh in 1841. Inside is a slightly spooky plaster cast of his hand, once famously outstretched with the words: “Dr Livingstone, I presume?” You’ll also find free wifi and, for a small deposit, your very own key to the town walls (see number 5). The library was built as a Shire Hall in 1572 by the Earl of Leicester – more of him later. The colonnades were open in those days to accommodate a Market Hall. 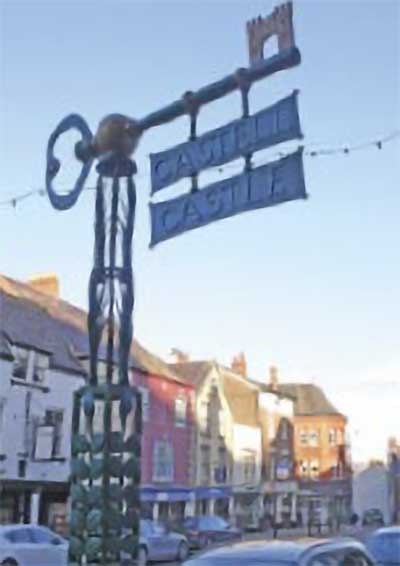 Look out for the signpost to the castle beside the Old Vaults pub.

Many of Denbigh’s quirky independent shops and lively pubs and cafés are clustered between High Street and the Lenten Pool roundabout, once a medieval fish pond. So feel free to make a detour at this point before returning to Broomhill Lane. This was once a quiet passageway linking town and castle, used mainly by local people – but now the secret’s out. It’s been transformed by no fewer than five artists with the help of poems, sculptures, decorative window grilles, overhead lights and even new utility covers, all based on Denbigh’s unique heritage or stories from the Mabinogion. 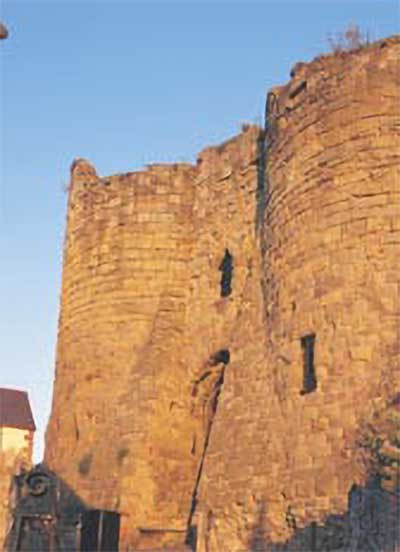 You’re now entering the medieval walled town of Edward I. The immense twin-towered Burgess Gate was built between 1282 and 1294 by his baron Henry de Lacy, Earl of Lincoln. Originally 60 feet high and bristling with defences including a ditch, bridge, portcullis and murder-holes, it was most likely the design of Edward’s favourite military architect, James of St George. It saw plenty of action during the famous siege of Denbigh during the Civil War – you can still see the scars caused by cannon fire from the parliamentary forces. Spectacular views over the town emerge as you pass under the gate and stroll along Leicester Terrace. 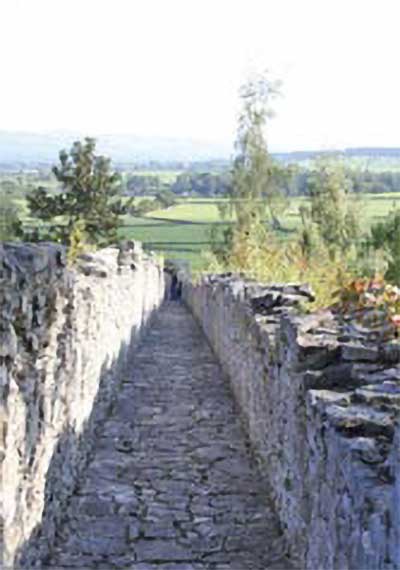 Access the walls via the ramp opposite Leicester Terrace.

Do you have your key? If not, return to the library or ask at the castle. You won’t regret it – although do watch out for uneven surfaces and unprotected drops. This is one of most complete medieval town walls in Britain. Built to guard a new English borough on top of the old Welsh stronghold of Dafydd ap Gruffydd, these limestone walls and towers provide stunning views over the Vale of Clwyd. Not to mention a tantalising glimpse into some of
Denbigh’s secret gardens and woodland walks. Look out for the white tower of St Marcella’s Church in the distance. 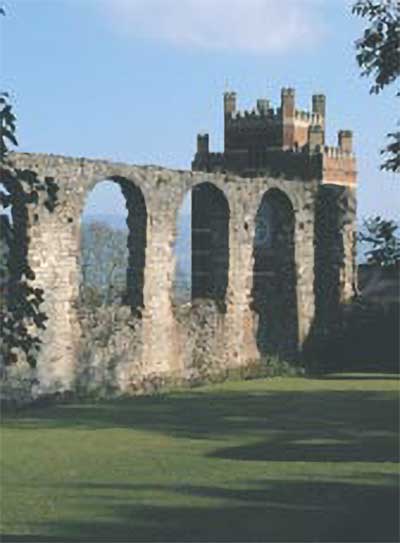 You may already have seen the roofless ruin of Leicester’s Church from the town walls. If not, look out for it on the left as you walk up Bull Lane. This is all that remains of one man’s vaulting ambition. Robert Dudley, Earl of Leicester and favourite of Elizabeth I, began this 10-bay arcaded church in 1578. Probably intended as a new Protestant cathedral, Gothic on the outside with a classical interior, it would have been the largest church of the Elizabethan age. But it was never finished. Almost as fast as the unpopular Dudley could raise the stones, local people pulled them down. He ran out of money and abandoned his grand scheme to the elements in 1584. 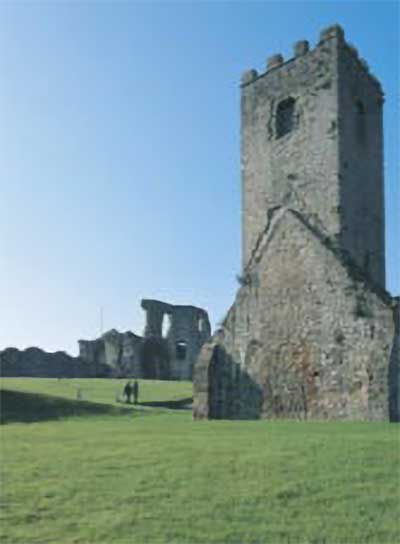 The isolated tower is still impressive enough. But St Hilary’s, built about 1300 as a garrison chapel to Edward I’s fortified town, once had a nave, chancel, north aisle and west tower too. By the Victorian era, it was badly decaying and churchgoers faced a stark choice: fork out for expensive repairs or build another church in a more convenient spot. No contest. St Mary’s Church with its lovely Arts and Crafts stained glass windows was opened in 1875 – and all but the defiant tower of St Hilary’s was finally demolished in 1923. 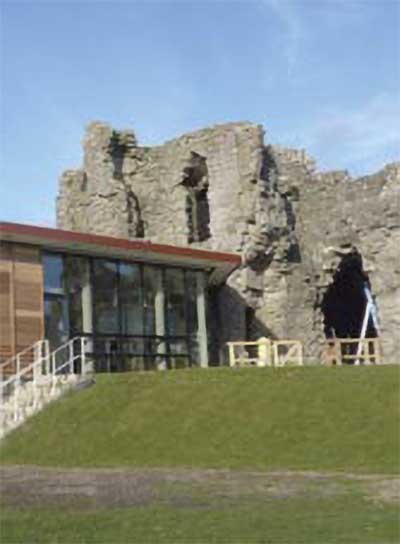 Step into the immense triple-towered gatehouse of Denbigh Castle and you’re sure to feel a surge of excitement. You’ll also hear the clatter of a rising portcullis and the heavy tread of marching soldiers, thanks to custodians Cadw. Their eco-friendly visitor centre will tell you all about this classic Edwardian fortress, built as part of an “iron ring” of late 13th century English castles to subdue the Welsh. It didn’t succeed at first. Madog ap Llywelyn captured the partly-built castle in 1294 and, when they eventually got it back, the English made the walls even thicker and higher.
www.cadw.gov.wales 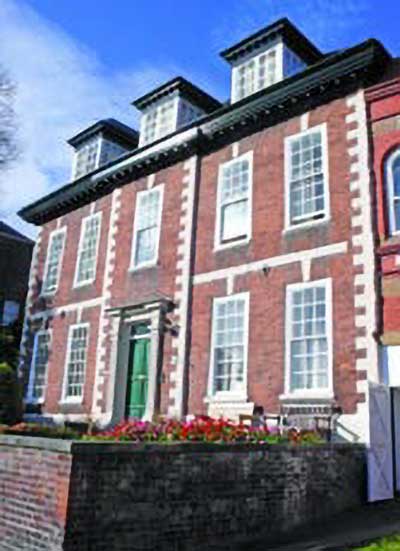 Return your key to the library and, if you wish, add this detour up and down Vale Street.

Even in Denbigh, with its wealth of listed buildings, Vale Street is an architectural marvel. As the town prospered, a series of gentry houses was built here to create a distinct residential quarter. The earliest, Grove House or Y Gelli, dates from 1574 – making it one of the first brick houses in Wales. The rest, such as Mostyn House or Grove Place, are mostly 18th or early 19th century. Look out on the left for Tŷ Thomas Gee, home of the legendary Nonconformist preacher and publisher. His Gwasg Gee printworks, which ran until 2001, can still be seen on Chapel Street. 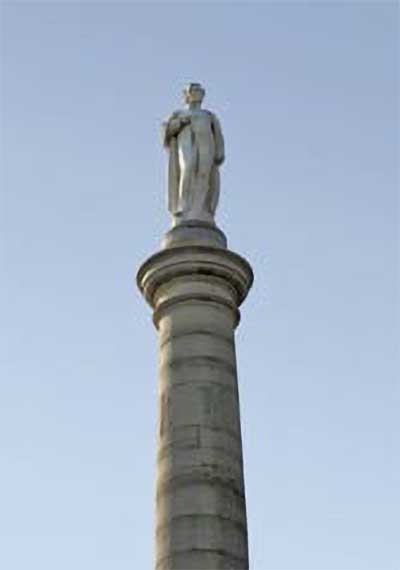 Coroner, JP, Alderman and Mayor of Denbigh, Dr Evan Pierce, was a hero of the cholera epidemic of 1832. But modesty wasn’t one of his strong points. When the grateful townsfolk offered to build him a memorial, he donated the land himself – right opposite his front door in now-demolished Salusbury Place. So every morning he could look out at his own statue atop its 72-feet high Tuscan column. Thanks to a restoration in 2007, this peaceful and secret spot with its fountains and conifers is the leading historic garden in Denbighshire.

Retrace your steps up Vale Street to return to your car.